We all know very well that after the launch of the Xiaomi Mi Mix 2S, the well-known Chinese smartphone manufacturer, of course, I am talking about the Xiaomi has several scheduled releases and one is its Mi Band 3, but there is also the Xiaomi Redmi 6. However, now according to the latest reports, the alleged Xiaomi Redmi 6 with the iconic notch like the tech giant Apple’s flagship smartphone iPhone X appears in leaked photos.

The well-known Chinese smartphone manufacturer, of course, I am talking about the Xiaomi has a presentation event scheduled for the last day of this month; and although there the Xiaomi Mi 8 will be the protagonist, it will not be the only device that will be released for its catalogue.

Yes, after the launch of the Xiaomi Mi Mix 2S, the well-known Chinese smartphone manufacturer, of course, I am talking about the Xiaomi has several scheduled releases and one is its Mi Band 3, but there is also the Xiaomi Redmi 6.

The successor of Redmi 5, which is one of its ‘super successes’ in the international market, and will obviously reach the market under the name of Xiaomi Redmi 6. And today in this article I will present the first leaked filtered photos of Xiaomi Redmi 6.

Just a few days ago, in the Weibo social network, the first images of the Xiaomi Redmi 6 were filtered, but we could say that these are the first official photographs. Why? Because they come from the TENAA.

In these images, it is shown with the final design with which it will reach the market. The design without frames is no longer surprising, although the introduction of the notch is something different.

In the first Mi Mix the Chinese company avoided it, but with the Xiaomi Mi 8 this notch will be available in the front and will be extended to other smartphones of lower ranges such as the Xiaomi Redmi 6 that we are dealing with, and that will count with a 5.45-inch screen diagonal with ratio 18:9. 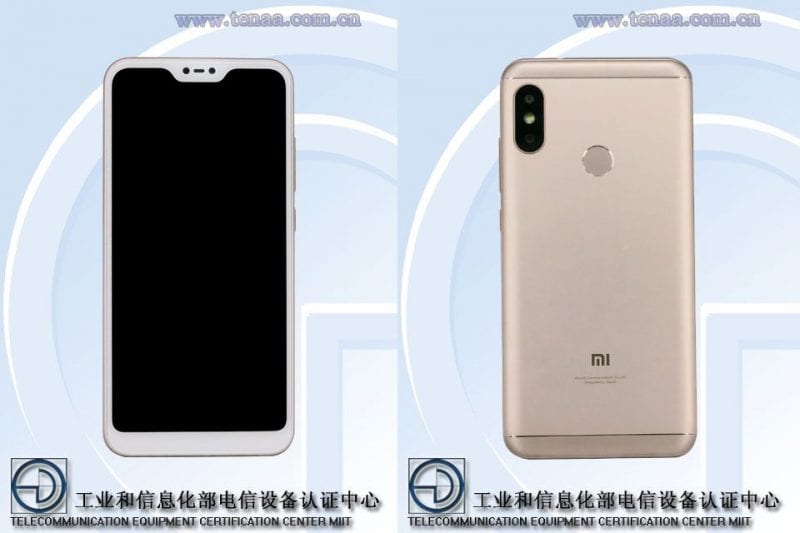 This same screen will have HD+ resolution and the ratio of 18:9. It is surprising that in the last images of the terminal in which it appears with the screen on it seems that it has the clean software, without the personalization layer of the Chinese brand.

This has led to thinking that it could have Android One, such as the Mi A1, although it is something that can not be confirmed yet. Just as we still do not have enough information to confirm whether it will have a Qualcomm Snapdragon 430, 435 or 450, while the battery will be of 3000 mAh.

At this point, it has also ensured that in the back it will have a double camera, but we also do not know what the resolution of its two sensors will be. In any case, we have the first images in which the design is completely bare.