After pointing out that the new iPhone will have new colors and an LCD version, Ming-Chi Kuo, an analyst at TF International Securities, has more information about other products that the tech giant Apple may introduce in September. However, now according to the latest reports, the tech giant Apple will include AvatarKit, Face ID in 2019 iPad Pro.

After pointing out that the new iPhone will have new colors and an LCD version, Ming-Chi Kuo, an analyst at TF International Securities, has more information about other products that the tech giant Apple may introduce in September.

According to him, the iPad Pro will now have an 11-inch version, in addition to the existing model with 12.9-inches. In both, the tech giant Apple should remove the Home button and offer 3D facial recognition, the famous Face ID.

If the information is confirmed, the 11-inch iPad Pro should replace the 10.5-inch screen model. With this, the tech giant Apple would continue to offer tablets of four sizes, considering the existing versions of 7.9-inches and 9.7-inches.

The tech giant Apple Watch, meanwhile, may have even larger displays than previously reported by the analyst, with 1.57-inch and 1.78-inch options. The company should also perfect the heart rate sensor of the watch.

Kuo also says that the tech giant Apple is expected to step up production of AirPods, which would enable Siri with voice commands, and AirPower, which could finally be released at the September event. 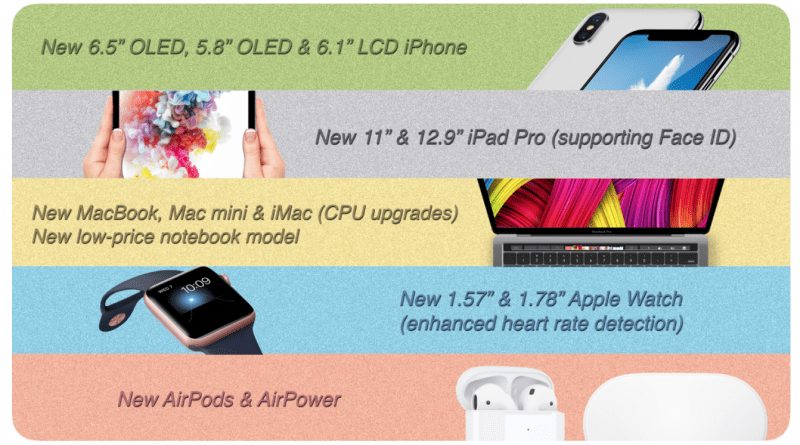 The analyst says the company will launch a more affordable notebook, but it will not be called the MacBook Air. It has also indicated the possibility of an upgrade of MacBook, MacBook Pro, iMac and Mac Mini.

Coincidentally, one of the updates was announced recently. Moreover, the tech giant Apple unveiled new models of the MacBook Pro with up to 4 TB of SSD and 32 GB of RAM that will begin to be sold in the second half of this year for from $16,199.

Also read: How to Use Multiple Apps at Once On Your iPad