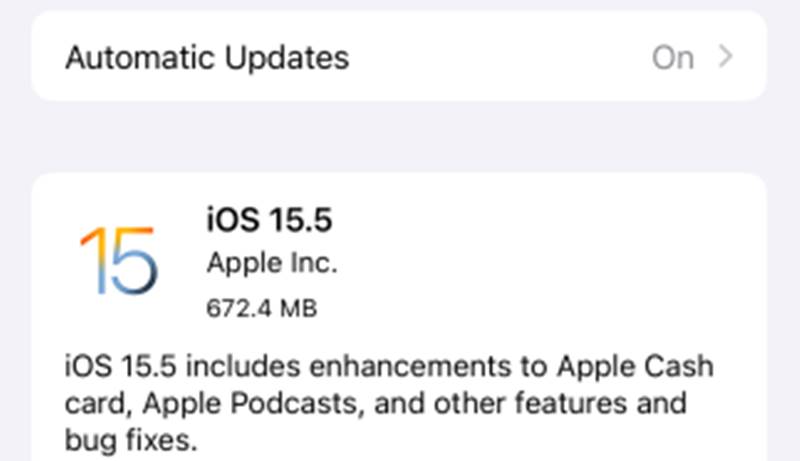 Apple released the fifth update of its iOS 15 before WWDC 2022. The iOS 15.5 and iPadOS 15.5 come with some new improvements to the Apple Cash and Podcasts app.

Previously, Apple’s Tap to Pay feature “iPhone to iPhone” was seen in implementation for the first time at Apple Park Visitor Center with a video from a visitor.

As we covered earlier in its Release candidate, it is a minor scale update with only some features and fixes, but the best thing, this is a closer step to iOS 16.

iOS 15.5 security update contains new upgrades to the Apple Cash card and Apple Podcasts. Also, there are many bug fixes and some features. Let’s discuss them briefly.

Apple Wallet now has a new ability for Apple Cash customers to send and request money from their Apple Cash card app.

Apple Podcasts now features a new setting, which allows limiting stored episodes on your iPhone, and it can automatically delete the older episodes.

A fix to WebKit, Any web content related to malicious that may lead to arbitrary codes or memory corruption issue, but now iOS 15.5 fixed it with improvements to memory management.

And another fix to ImageIO prevents attacks on unexpected application termination from Remote hackers with improved input validation.

Some of the above features may not be available in some regions, and these features will perform differently on different devices. You can also check official release notes.

You can update your iPhone or iPad, but your iPhone must be iPhone 6 or later. The iOS 15.5 and iPadOS 15.5 updates are free for download and can easily install from the Settings app. To install the iOS 15.5, go to Settings > General > Software Update and get it.