Apple has released the third beta of the upcoming iOS 15.5 for the registered developers, where few new changes have been spotted.

Last month, The company rolled out the big update 15.4 for iOS and iPad, and after a week, they unveiled the next update’s beta to developers. Besides, Apple is also working on iOS 16.

Mainly, iOS 15.5 and iPadOS 15.5 might be the last significant update of iOS 15 because Apple will announce the iOS 16 at WWDC 2022, which is taking place in June. After two months, the company could release it to iPhone users. 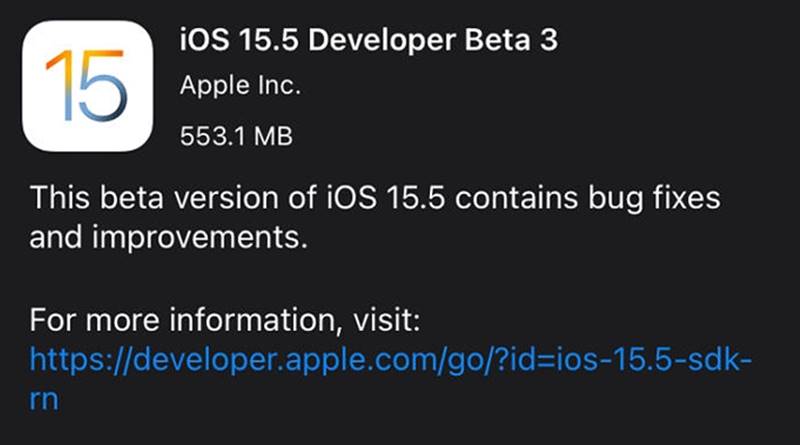 The latest iOS 15.5 Beta 3 doesn’t have many significant changes or features, but it includes all the features that we saw in the second beta version.

A new authorization is added to its Passkey Technology, which will make it easier for Mac and iPad users to sign in on any website or App with an already saved password on their iPhone.

New options were added to the Developer settings that will allow you to run a test on ping packet loss, idle ping latency, and download and upload speeds, and you can get average results.

And some new fixes to Health App, mainly fix is the crashing of the app, when you try to use the Blood Oxygen feature.

iOS 15.4 Beta 3 changes 🧵: This update mostly contains small text changes. Apple changed “people who are using an Apple device” to “contacts who are using iMessage”. Minor change or could it be related to recent EU regulation? iMessage coming to Android? pic.twitter.com/xoKqT8UaUv

According to Development analyst, Steve Moser‘s latest Tweets, This update also contains small text changes from “people who are using an Apple device” to “contacts who are using iMessage” which might be an indication of a long-rumored iMessage entry to Android.

Moser also mentions that Apply Pay references to Apple Cash in iMessage are still showing Unable to Link Account while we push Tap to Pay.

In conclusion, you are thinking about when this iOS 15.5 will be released so there is no confirmed date for this update, but we can assume it to come at the beginning of next month.