We all know very well that artificial intelligence has reached the mobile devices to stay for many purposes. Now, according to the latest reports, the British multinational semiconductor and software design company, of course, ARM wants to put its new AI chip everywhere it can.

ARM Wants To Put This AI Chip Everywhere It Can

Artificial intelligence has reached the mobile devices to stay for many purposes. We no longer speak only about the assistants who can perform more or less tasks for us, but of internal processes that help the phone to be more fluid, that improve the result of the cameras. So, basically apart from the virtual assistant, we are talking about some extraordinary features like invisible algorithms so that everything works better, and for its operation, the more specific hardware is needed.

ARM already presented its DynamIQ last year, a configuration of cores that went beyond the classic big.LITTLE standards to place different cores at the service of an optical operation of the machine learning codes. Now the British have gone a step further and already have their own chip performing machine learning tasks, the new Project Trillium. 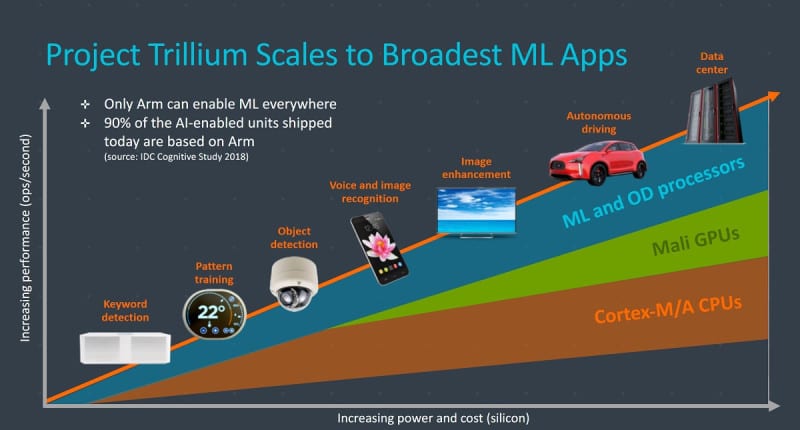 Although the future holds a good processing load for machine learning and deep learning in the cloud, local processes remain fundamental. Hence, ARM wants to put the focus on the mobile phone, among others, load with much of the neural processing in these advanced executions.

Project Trillium was born with that philosophy and becomes a new integral product that not only includes hardware but also comes with its own software. A chip that is inspired by the internal structure of GPUs, for its high level of processing, but that develops a new concept, a specific chip for artificial intelligence processes.

The chip does not arrive alone, the ARM has also created a specific processor for detection and recognition of objects, and has adorned it with libraries to take advantage of neural networks.

This processor will be dedicated to recognizing people and patterns in both images and videos, and who knows if it will not take the step to also integrate live video. That is, in recognition of objects captured live by the camera of our mobile.

With a mobile market to absorb its products encrypted between 1,700 and 2,200 million devices, the ARM will send the design of its Project Trillium to manufacturers in the middle of this 2019 and is confident that the processor will reach the market at the beginning of next 2019.

We will see how many manufacturers decide to incorporate this new chip into their different SoCs, since the most important ones, such as Qualcomm, Samsung or Apple, already have these chips of their own development in their latest processors.

So, what do you think about this new initiative of the ARM? Simply share all your views and thoughts in the comment section below.