We all know very well that the security of Windows sessions has never been one of the main strengths of this operating system. However, now according to the latest reports, Cortana software, the tech giant Microsoft’s AI could easily help anyone unlock your Windows 10 computer.

Cortana Could Help Anyone Hack Your Windows 10 Computer

The security of Windows sessions has never been one of the main strengths of this operating system. Since the first versions of the operating system have always been ways to enter a computer without knowing the password, either using a hidden Administrator account or simply using tools to force a password change in a few seconds. Now, the security of the sessions returns to give you a trauma what we just speak about Windows 10, and for this flaw, we should thank Cortana.

Cortana is the tech giant Microsoft’s personal assistant installed by default in Windows 10. This assistant allows us, in addition to helping us with certain tasks, to search the Internet and all the files on our computer.

On several occasions, the insecurity of this personal assistant has already been demonstrated, but this time, McAfee has found a new bug, registered as CVE-2018-8140, which could allow anyone to easily access a locked computer without using any exploit or nothing, simply with having physical access to the computer.

This vulnerability registered by McAfee is based primarily on two native functions of Cortana. On the one hand, we have the fact that Cortana indexes all types of files, including their content, in their database to show results instantly when we perform a search, and on the other hand, the insecure way in which these results are displayed.

This can lead to two possible scenarios. The first of them, if the victim keeps a file with their passwords on their computer (something more common than we think) we can find this file on the computer by searching Cortana and know its content due to the preview of it. 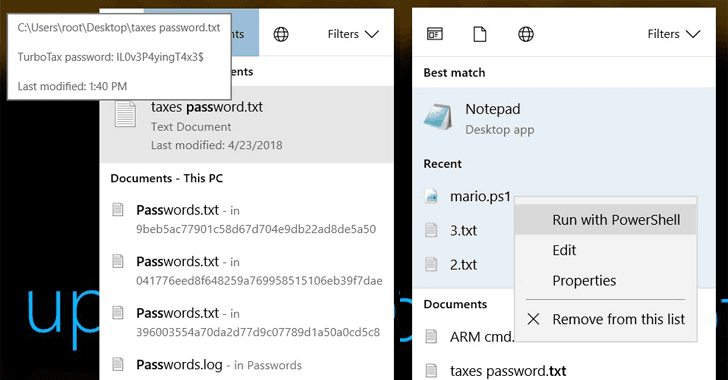 How can we protect ourselves from this Cortana vulnerability in Windows 10?

The tech giant Microsoft has already corrected this vulnerability with the security patches of June 2019 for Windows, so if we have already installed them on our computer we will not have to worry, because we will be properly protected. At least, until another similar fault reappears in Cortana.

In addition to updating our computer is very advisable to configure Cortana so that this assistant does not work when we have the computer locked.

The tech giant Microsoft has a lot of work to do in relation to Cortana. As we have said, this is not the first time that the Microsoft assistant is affected by a vulnerability of this type, and probably will not be the last.

In addition to properly reviewing the operation of the wizard, the tech giant Microsoft should consider keeping the Cortana functions turned off in the default lock screen. Thus, at least, vulnerable users will be those who manually activate the assistant, not all of them.