Recently, lots of Windows 10 users have reported that they are getting a strange ‘Taskeng.exe’ pop-ups. Taskeng.exe black screen window pops up every once in a while. Users usually see a blank screen, but once closed, it sometimes shows a short message telling about specific executable errors.

Lots of Windows 10 users believe that ‘taskeng.exe black screen’ appears due to malware or virus. However, it’s not true at all, taskeng.exe is a process which is known as ‘Task Scheduler Engine. Microsoft Corporation signs the process, and it has no links to any security threats.

It’s one of the essential system processes that are responsible for keeping track of tasks that are set to run at any particular time. However, since its a critical system process, it’s also one of the prime targets for malware. There are a wide range of things that can trigger the ‘taskeng.exe black screen’ error. Below, we are going to list some of the most usual reasons that trigger the error.

Contents show
How To Fix taskeng.exe black screen error?
1. Check whether its a virus or not
2. Use Malwarebytes and ADWCleaner
3. Disable the User_Feed Synchronization
4. Run the SFC Command
5. Disable Office Background Task Handler Registration

1. Check whether its a virus or not

2. Use Malwarebytes and ADWCleaner

If you have just found that the ‘taskeng.exe’ is not located in the C:\Windows\System32 folder, then you need to use Malwarebytes. Malwarebytes is one of the best and leading malware scanner available for the Windows operating system. The security tool effectively scans and removes hidden malware and other security threats from the computer. Once downloaded, make sure to run a ‘Full Scan’ with Malwarebytes.

Step 1. First of all, press Windows Key + R to open the Run Dialog box. On the RUN Dialog box, enter ‘taskschd.msc’ and press the Enter button.

Step 2. Now from the left-hand side panel, right-click on the ‘Task Scheduler Library’ and then select View > Show Hidden Tasks 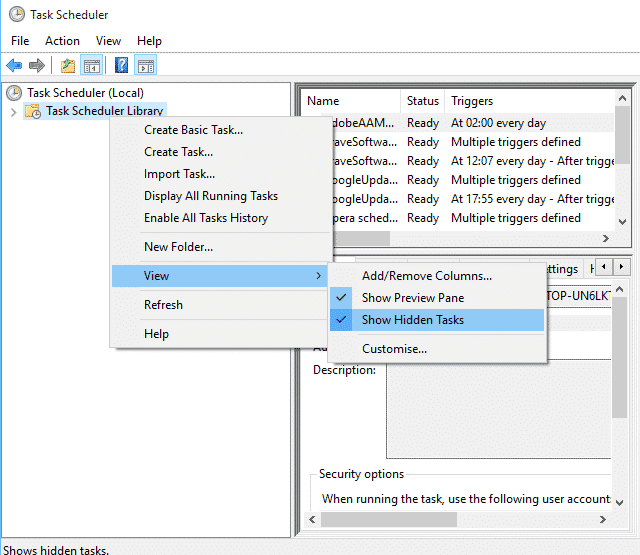 Step 3. Now on the list of tasks, select User_Feed_Synchronization and then select ‘History’

Step 4. Now from the right-hand side panel, select the option ‘Disable’

That’s it, you are done! This is how you can disable ‘User_Feed Synchronization’ from Windows 10. Now just restart your computer and you will no longer get taskeng.exe error message.

Well, sometimes the Taskeng.exe Black screen error occurs due to corrupted Windows system files. So, in this method, we need to run the SFC command to deal with the issue. If the System file checker can fix the problem, then you don’t need to reinstall the Windows 10 operating system.

Step 1. First of all, right-click on the Start button and select ‘Command Prompt (Admin)’

Step 2. On the next Window, you need to enter the command – sfc/scannnow

Step 3. Now you need to wait for a few seconds or minutes until the scan completes. Once completed, restart your PC.

That’s it! You are done. This is how you can fix Taskeng.exe black screen error from Windows 10 operating system.

Step 2. Now, from the left-hand side panel, right-click on the Task Scheduler Library, then select view and enable the ‘Show hidden tasks’

Step 3. Now expand the Microsoft folder and then double click on the ‘Office’

Step 4. Now select ‘OfficeBackgroundTaskHandlerRegistration’ and then click on the ‘Disable’ button.

That’s it, you are done! This is how you can disable the Office Background Task Handler Registration to fix taskeng.exe black screen error message.

Can I fix other Black screen errors by following these methods?

These are the common methods and could help you deal with various Black screen and blue screen of death errors.

Is Taskeng.exe Black Screen a Virus?

No, it’s not a virus, but viruses and malware can trigger the error. It mostly appears due to corrupted registry entries and corrupted system files.

So, these are the best methods to fix the taskeng.exe black screen errors. If you know any other method to fix the error, let us know in the comment box below.