The tech giant Google will launch its brand new Pixel smartphone, of course, I am talking about the Google Pixel 4 which will also debut the brand-new version of the Android, of course, Android 10. As recently we have spotted a brand-new Google smartphone in the platform of the well-known benchmarking portal, Geekbench.

Just a few weeks ago we knew in Geekbench a Google device that could perfectly fit the description of a Google Pixel smartphone, something that does not happen with the new device that has now gone through the performance testing portal.

Last month in the well-known portal Geekbench we saw another Google smartphone that was called Coral and that had a RAM of 6GB which is being accompanied by Android Q. Well, the device that has now gone through Geekbench, Pixel 4 has a different feature and would be a complete involution. 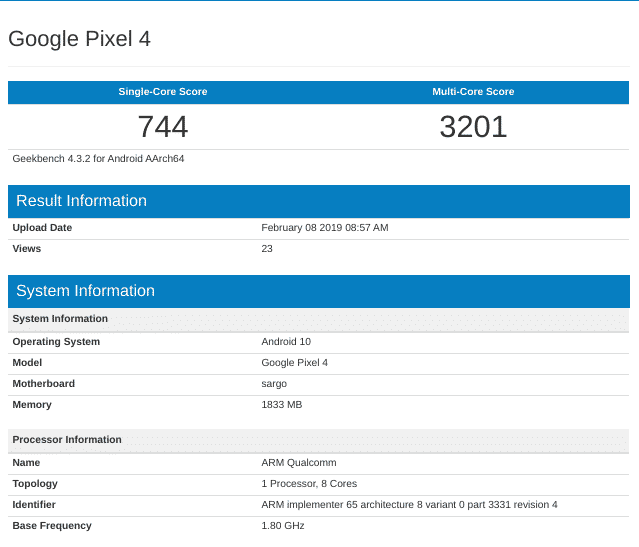 The Google device, of course, I am talking about Pixel 4 that has now gone through Geekbench is code-named as “Sargo” and not only even in the Geekbench portal it is clearly visible that the model name is “Google Pixel 4” with Android 10 in the description, instead of Android Q.

What has completely confused us is that this all-new device, of course, Google Pixel 4 has passed the test with 2GB of RAM, which is a figure that we never have seen in any generation of Google Pixel phones.

Also Read: How To Disable The Auto-correction or Spell Checker On Android

As it is logical, for now, we can not confirm this data 100% that appears in the test, but the true fact is that all these data are present on the Geekbench website, which simply do not allow us to 100% doubt the existence of this device, Google Pixel 4.