Just a few months ago, Google released the Pixel 6 lineup. Now, already the details about the next model’s Pixel 7 and 7 Pro are leaked. Recently, there was news on what chipset the Pixel 7 series will have, and also details on their codenames.

The latest leaked renders show how the next-gen Pixel 7 smartphones will look. A CAD-based render of Google Pixel 7 Pro has surfaced online. The design is quite similar to Pixel 6.

The first leak of Google Pixel 7 suggested that the smartphones will have a second-gen Tensor chipset and Samsung Exynos 5300 modem. 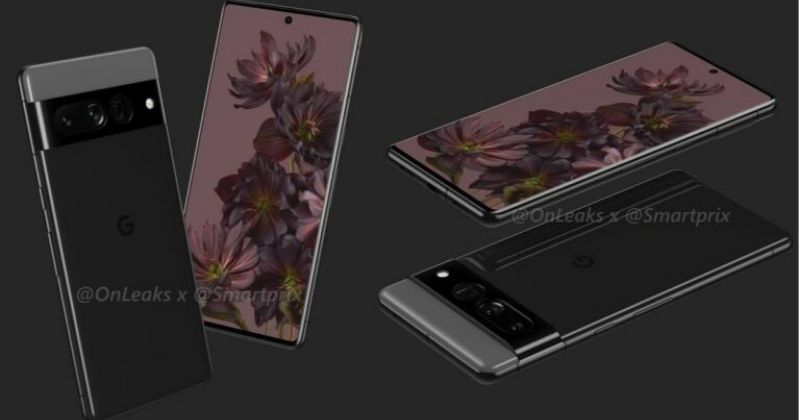 A popular leakster, OnLeaks, in collaboration with Smartprix, released CAD renders of the upcoming phones. The shared images reveal that the Pixel 7 series will have the same design as the Pixel 6 series.

We can expect a dual-tone design with a camera visor and a punch-hole display. The size of the display might be 6.7-inch or 7.8-inch.

There are a few other changes, like the horizontally-placed rear camera bar has a big camera house. And the Pixel 7 Pro camera bar is less protruding and merges in the frame.

At the backside of Pixel 7 Pro, there are three cameras that might look odd. It may have a wide-angle camera, periscope telephoto camera, and an ultra-wide camera. On the front side, there is a hole-punch selfie camera at the top of an OLED display.

According to SmartPrix, the Pixel 7 Pro device has the same curved edges as the Pixel 6 Pro. The Pixel 7 Pro is shorter in length and a bit wider and thicker. There is no plastic strip that houses the mmWave antenna.

Other details from renders are there is a USB Type-C port and a dual stereo speaker at the bottom. There is a SIM tray on the left side, and on the right side, there is a volume rocker and a power button.

There is no confirmation from Google about the Pixel 7 series. The company likely won’t release the upcoming series until the fall.