On LG’s launch event that held in the New York City this Wednesday, the company launched the all-new LG V40 ThinQ. LG has made some serious changes with the phone, and it can now compete with some high-end smartphones like Samsung Galaxy Note 9, iPhone XS Max.

On LG’s launch event that held in the New York City this Wednesday, the company launched the all-new LG V40 ThinQ. Well, let me tell you that LG V40 ThinQ is the successor of previous year’s LG V30 and it was also the company’s first Android smartphone to sport 5 camera.

The smartphone is all set to compete against OnePlus 6, Samsung Galaxy S9, etc. LG V40 ThinQ is a high-end smartphone whose price is set to $899.99 in the US. The smartphone will be available in multiple color variant like Aurora Black, Moroccan Blue, Platinum Gray, Carmine Red. 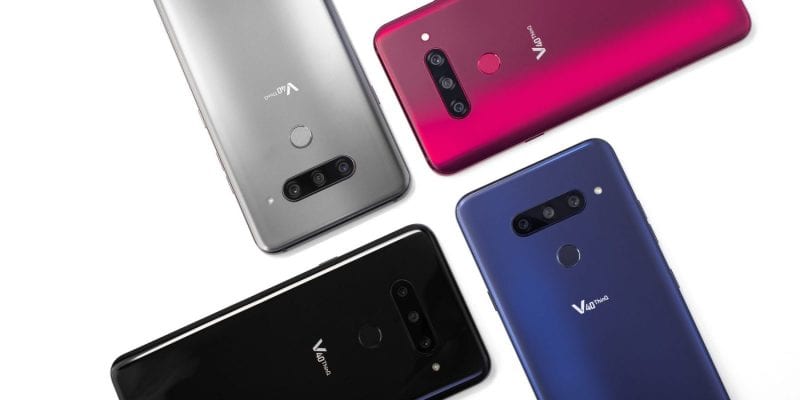 As mentioned earlier LG has made some serious changes with the phone, and it can now compete with some high-end smartphones like Samsung Galaxy Note 9, iPhone XS Max. Not only that, but LG V40 ThinQ is also the company’s first phone to sport a total of five cameras.

Regarding specification, the phone features a massive 6.4 inch QHD+ OLED FullVision display with a 19:5:9 aspect ratio. LG V40 ThinQ stands out from the crowd due to its Qualcomm Snapdragon 845 processor, and it also houses 6GB of LPDDR4X RAM. Talking about the storage, LG V40 ThinQ packs 128GB of UFS 2.1 inbuilt storage which can be expanded via microSD card.

If we leave these behind, the most notable feature of LG V40 ThinQ is its camera. The smartphone packs unique tripe camera setup where the primary 12 Megapixel sensor gets f/1.5 aperture, the second 16 Megapixel ultra-wide sensor comes with f1/9 aperture and the third 12 Megapixel senor sports a telephoto lens with f/2.4 aperture.

On the front panel, the smartphone packs a dual camera module with 8+5 Megapixel sensor. Another exciting feature of LG V40 ThinQ camera is that it allows users to take three consecutive shots from the three rear camera which enables users to pick the best among them.