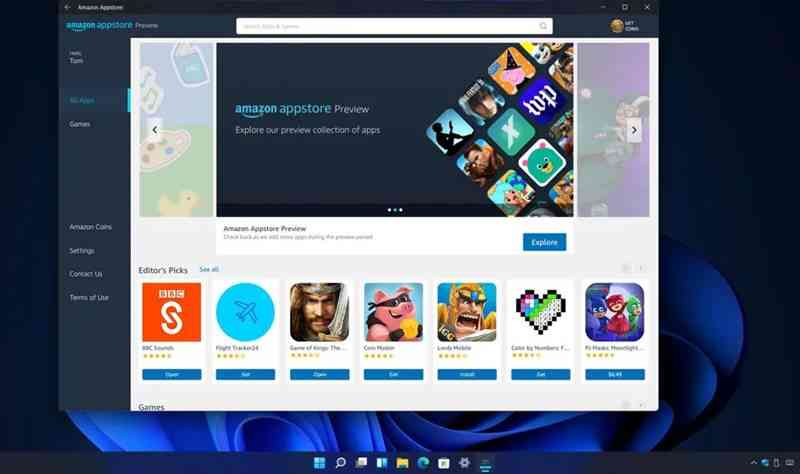 Previously, Windows 11 also released another update to its Insider Program, and this build had some minor improvements and fixes. Still, a new notable search box on the desktop related to Widgets made it unique.

In the United States, Android Apps in Windows 11 functionality is supported by the Amazon App Store, but in others, it is upheld by Microsoft Store to run major mobile apps.

This release 2204.40000.15.0 introduced an updated Windows Subsystem for Android to Android 12.1, the latest Google technology with more app optimizations and enhancements.

Currently, in its testing, it might cause running some apps, but it will not be like this in the future when it comes to stability.

Now, what’s exciting about Android 12.1? We cannot notice its impact immediately, as every upgrade version has its specialty; the same goes for this.

The company will reveal the upgrade improvements and effects later, but it is said to be made easier to manage for app usage.

Besides, Microsoft also introduces a new feature, the networking experience, that allows Android systems to control apps on the same network.

For example, the Android app like smart home can also be managed by Windows.

There are also some improvements and issue resolved to the camera in Android apps like incorrect camera preview and disturbed camera feed and improved support for input devices such as mouse & keyboard.

This Insider update also comes with many issue fixes, and you can check the complete changelog list here.

Also, it features some minor changes in the design of the setting page. This upgrade to Windows Subsystem for Android will make Windows support kind complete Android Apps system, so your wait will be worth it.