We all know very well that on May 23, 2019, HTC has presented its one of the flagship smartphones, the HTC U12+, which would be the new high-end of the Taiwanese for this 2019. However, now according to the latest reports, the well-known Taiwanese smartphone manufacturer, of course, HTC just unveiled the world’s first blockchain smartphone.

HTC debuts in the world of cryptocurrencies with the HTC EXODUS 1, its first mobile with Blockchain technology. It is a mysterious smartphone that after multiple teasers is now official, although its presentation almost leaves more unknowns than it clears.

We are facing a mobile with high-end specifications and apparently a transparent back, although its mobile part is almost secondary. The reason for being this phone lies in its secure enclave, the place to store cryptocurrencies, personal keys and all your digital identity.

Half mobile Android & half purse

It is not clear if the HTC EXODUS 1 is a phone with cryptocurrency wallet features or a wallet with a phone added to it. What is clear is that these are two distinct parts.

Speaking strictly from its Android mobile status, we are facing a high-end mobile that marks all the boxes for what we expect from one of them in 2019: Snapdragon 845, 6GB of RAM, 128GB of storage and dual cameras front and rear. The fingerprint reader, meanwhile, is in the back.

The general design is very similar to the HTC U12+ which, incidentally, shares much of the specifications, including the transparent design on the back. The screen is 6-inch with Quad HD+ resolution, but unfortunately, we do not have any pictures of it so we do not know if it has a notch or not. If you look at the HTC U12+, it is most likely not so. 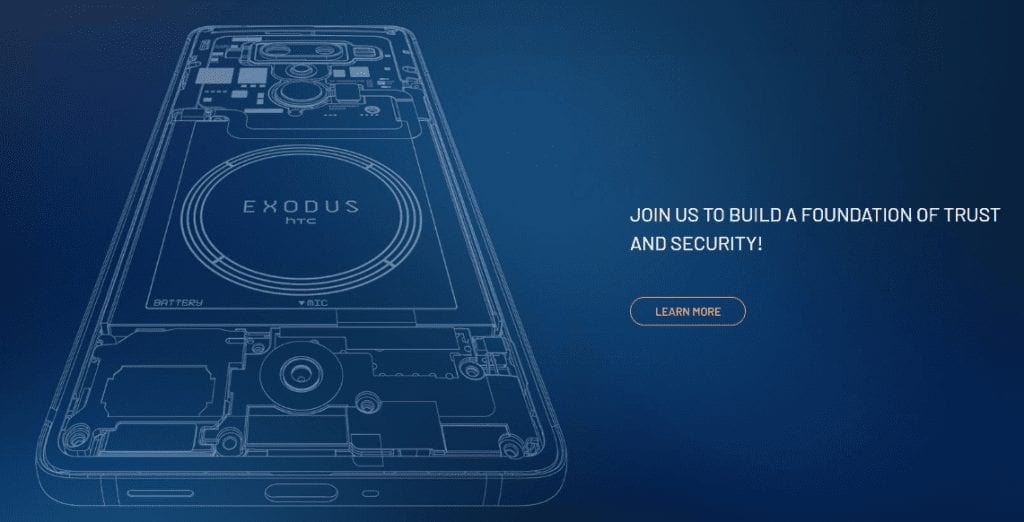 The truth is that about the potential of the HTC EXODUS 1 is its secret enclave, a safe and isolated operating system in which to you can store all your cryptocurrencies, tokens or, in the future, any other type of personal information as well. The compatibility with different services is in the hands of the community, which will soon be open access to the API.

Another interesting security feature is the innovative system to recover your keys in case you lose your phone. This is a job if you have a normal mobile, but if it is a mobile phone in which you have stored hundreds or thousands of dollars in cryptocurrencies, it is an important task.

The recovery system has a first and last name, Social Key Recovery, and is based on distributing your password among a number of contacts. They need to download a key maintenance application, so you will need to have some pretty motivated friends. It is not clear if they need to also have an HTC EXODUS 1.

Also Read: Top 30 Best Antivirus For Your Android Smartphone In 2019

Moreover, the all-new HTC EXODUS 1 is available in previous access through its website. The mobiles will begin to be officially distributed in December of this year in the United States, Taiwan, Hong Kong, Singapore, New Zealand, the United Kingdom, Austria, Norway and other European countries. It can only be paid in cryptocurrencies: 0.15 BTC or 4.78 ETH, which equals to USD 964.53. So, what do you think about this? Simply share all your views and thoughts in the comment section below.