Although not recent, rumours have recently intensified about a possible Huawei operating system that will serve as an alternative to Android.

According to a recently shared image, this operating system may already be real, which is named as Kirin OS, and may accompany Honor Play.

The well-known Chinese smartphone manufacturer, of course, Huawei is currently one of the fastest growing smartphone brands in the market, largely due to its strong focus on the various ranges.

To boost its growth and reduce dependence on third parties, the Chinese giant has been aiming to develop more and more components in order to have everything it needs inside doors for its equipment. This strategy also allows the brand not to be as affected by political decisions as it has recently been with ZTE.

In addition to the components already developed, especially the Kirin processors that have been a major evolution, Huawei has been talking about Huawei’s goal to develop its own operating system for several years.

With business relations with the United States not being on the hottest days, which puts some businesses at risk, such as the tech giant Google’s licensing of Google Apps, rumours have surfaced about a possible alternative to Android.

With the imminent arrival of the new Honor Play, everything indicates that will also arrive the presentation of the new operating system, with the name Kirin OS.

Kirin OS – Huawei already have an alternative to Android?

While it remains committed to working with Google to bring its Android-powered smartphones, Huawei has been wary of potential issues in the future with Google Apps licensing. Apparently, in recent years has developed a new mobile operating system that may already be ready to be released.

According to a shared image of the new Honor Play, which will be presented on June 6, this may be the first smartphone to bring this new operating system. Huawei has announced for this smartphone an innovative experience, with the possibility of playing in 4D and a sweeping speed, which may be related to the new operating system. 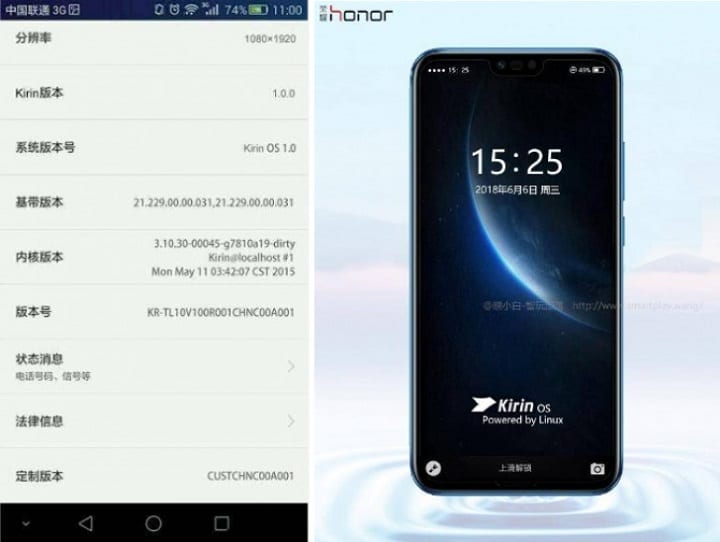 In the image, we can see a smartphone equipped with an unknown Kirin OS 1.0 and a mention where it stands out the base in Linux. At the look-up level, through the settings page, we can see, it does not seem to be very different from the Android operating system, and an AOSP version of Android (Open Source) may have been used.

Although everything seems to indicate that the new operating system is close, there is always the possibility that this image is not real and it may be a moded version of Android that Huawei devices currently use. To clarify the existence, now it is necessary to wait for day 6, where everything will be revealed during the presentation of Honor Play.