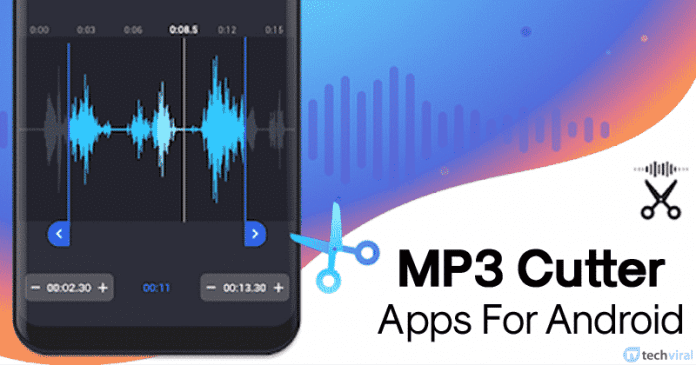 Let’s admit it; sometimes, we want to set any particular song as a ringtone. However, keeping a full-length song as a ringtone is not possible. So, in such a situation, we only have two options: Downloading the shorter version of the song or cutting a part of the music to apply as a ringtone.

You can always download ringtone apps to get the trimmed version of the song. However, for that, you need to have a good ringtone app. Therefore, it’s always best to use an MP3 cutter app to get the song trimmed. This article will share a list of the best MP3 cutter apps you can use on your Android.

Also Read: How to Set Different Notifications Sounds for Apps On Android

These MP3 cutter apps would allow you to cut a few music parts to apply as a ringtone. You can also cut out parts to create Notification tunes as well. So, let’s check out. 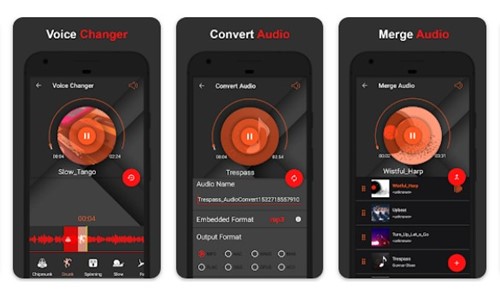 If you are searching for a free and easy-to-use audio editing app for Android device, then look no other than AudioLab. AudioLab is a lightweight but one of the most advanced audio editing apps you can use on Android.

With AudioLab, you can easily cut audio files, mix audio clips, record your voice, and more. It also allows you to apply audio effects to your recorded clips. Overall, AudioLab is an excellent audio editing app for trimming MP3 music files. 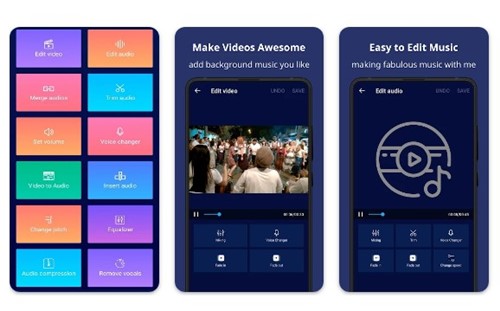 The good thing about Music Editor from HappyBees is that it offers you rich audio editing features such as applying fade-in and fade-out effects, changing the volume level, applying audio effects, and more. 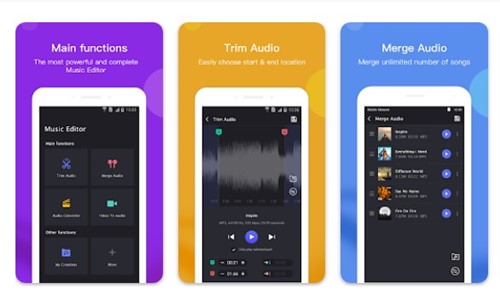 Music Editor from Pony Mobile is not as popular as the other apps on the list; it still offers you every feature to create an MP3 ringtone. You can use the app to trim MP3 files and create a ringtone.

Some key features of Music Editor from Pony Mobile include trimming, merging, mixing, and compressing the audio files. Besides that, you also get an audio tag editor, the ability to reverse the audio file, mute parts, etc. 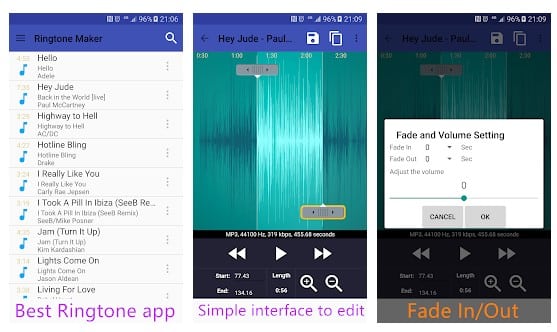 As you might have guessed from the name, Ringtone Maker is an app that allows you to cut music files to create a ringtone. The app is extremely lightweight and easy to use.

With Ringtone Maker, you can create ringtones, alarm tones, and notification tones in just a few seconds. If you don’t want to create a ringtone, you can cut the MP3 files. 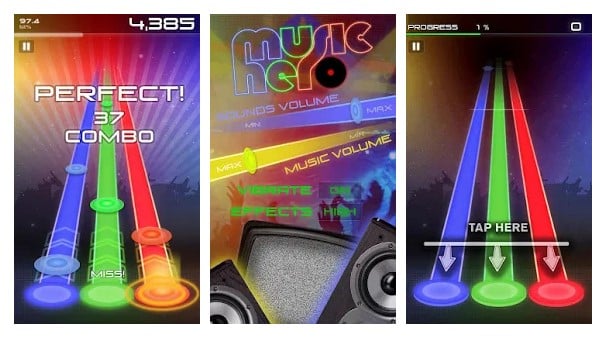 Music Hero is another top-rated MP3 cutter app available on the Google Play Store that you can use right now. The great thing about Music Hero is that it supports various music file formats like WAV, MP3, AAC, AMR, 3GP, etc.

What’s more interesting is that Music Hero also offers a built-in MP3 player that can be used to edit, cut, and paste audio parts. 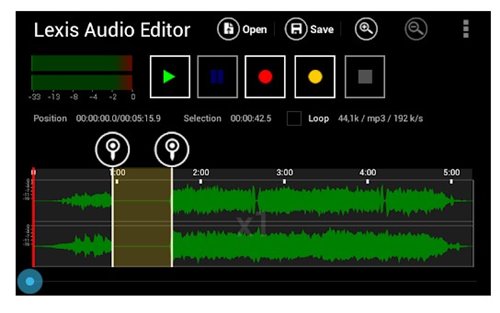 You can use this to record audio, cut/copy/paste audio files, reduce noise in the audio, and more. Overall, Lexis Audio Editor is an excellent audio editing app for Android. 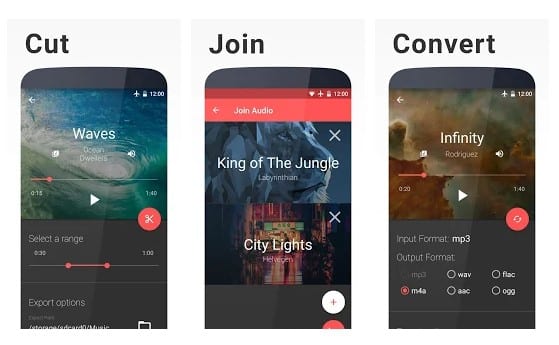 Timbre is an audio and video editor app for Android, which you can use right now. With Timbre, you can easily cut, merge, and convert audio and video files. What’s more interesting is that it’s completely free and ad-free. 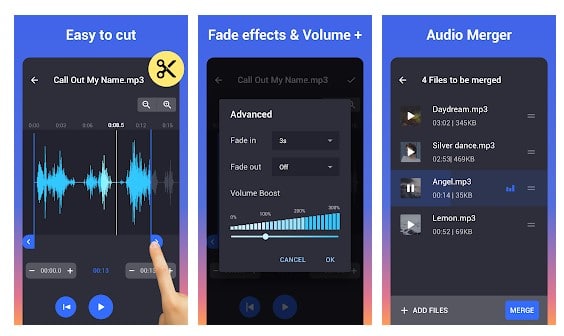 MP3 Cutter and Ringtone Maker is another best app from Inshot that can trim, merge, and mix music.

The app also lets you add audio effects to the music, like you can add fade-in and fade-out effects. Apart from that, it also has a built0in music player to play music clips. 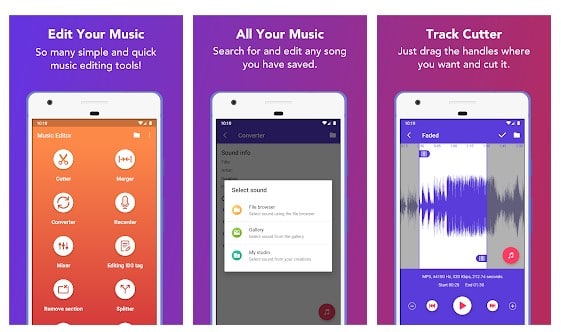 Music Editor has everything that users look for in an audio editing app. Music Editor can help you in multiple ways, from cutting audio clips to merging.

After cutting the audio files, you can even convert the music files into different formats. Other than that, the Music Editor also has a music player and an MP3 recorder. 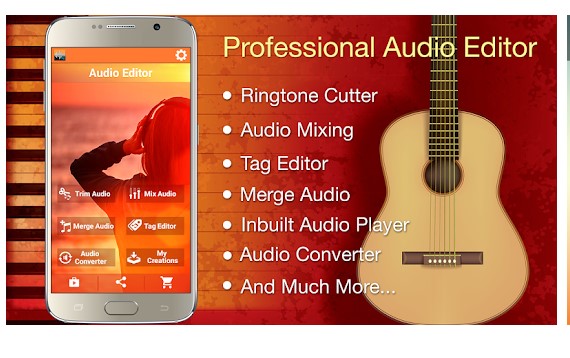 Audio MP3 Cutter is for those searching for a powerful and complete audio editor. It has all the features you need to feed your music editing needs.

From trimming music files to mixing up tracks, Audio MP3 Cutter can do it all. More importantly, the app is entirely free and has no restrictions.

So, these are some of the best MP3 cutter apps for Android. You can use these free apps to cut MP3 files on an Android smartphone. If you know of other such apps, let us know in the comment box below.