The easiest way to transfer WhatsApp data from one android phone to another is via Google Drive. But now,, Google is trying to minimize their free services. Recently Google has deleted the drive data of all inactive users, and now they are going to keep track of WhatsApp users’ backups.

Whatsapp has announced that they are working on a new feature where users will get more control over their own data. So there will be options where users can easily manage their all chats, photos, and videos while taking backups. 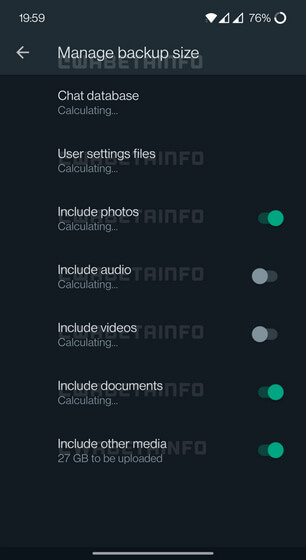 As per a report by WABetaInfo, in the upcoming version,, users will have options to choose what they want to backup and what they do not want. In WhatsApp beta 2.21.21.7, we can clearly see that there are options to manage photos, audio, videos, documents, and other media while taking backup.

From sources, We know that Google will allow users to take a backup of 2000MB (2GB). There are chances that users can purchase more storage and take backup of their WhatsApp data which is larger than 2GB.

The feature is spotted in WhatsApp beta on Android and is not yet available for beta testers as well.

Once this update will roll out, only android users will face issues. Because iOS users do not use google drive to take backups, they do take backups on iCloud only.

Earlier this year, Google has ended the free unlimited storage for Google photos. And now Whatsapp has brought the same thing. So, now its the correct time to take backup of your Whatsapp for free as still the unlimited backup service is going on.

Apart from this, Whatsapp is working on a new Community feature for groups. It is a way for users to organize the groups in a better way.