Whatsapp is rolling out a new feature called “View Once” for all the beta users as of now. Recently, Mark Zuckerberg has revealed few features coming to the instant messaging app, and now View Once feature is out for Android beta users.

This new feature has been in work for quite some time now, and it allows users to send photos in a more privacy-friendly manner.

Whatsapp View Once Feature Out for Android Beta Users 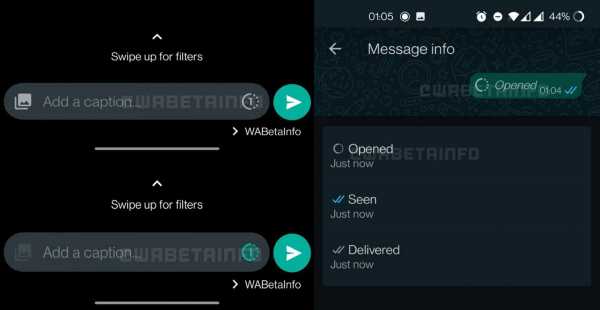 View Once the feature is similar to Instagram’s media expiring feature, where once the receiver opens the photo and leaves the chat, the photo disappears. On Whatsapp, the same thing happens, when the user sends a video or a photo, this media can be viewed only once by the receiver.

According to WABetaInfo, Whatsapp is rolling out View Once feature for the beta Android 2.21.14.3 version. So, all the beta version users, if you haven’t got the feature yet, then have patience; you might receive it in the next update. Even the iOS beta users will soon be getting this feature.

They have also shared some screenshots of the new feature where we can see how it will work. You can see the view once button next to where we preview the message. Once the user turns on this mode and shares the image or a video, the receiver will have one chance to see it. The sender can see the status of the message, delivered, seen, and opened.

However, if the recipient wants to save the media, then they can take a screenshot of it as there is no screenshot detection on the app, so the sender will not be notified.

This new feature works in Whatsapp groups also. Each member of the group can view the media once. And the sender can get to know who opened the media.

All the users who have disabled read receipts will not be able to see when the View Once photo has been opened. However, the sender might see that the user has opened the Photo sent by them. Even the blocked users in your contact list can see the images if you are in a common group.