If you are a die-hard fan of Realme, then there’s good news for you. The company has now confirmed that the upcoming device will be available on Flipkart and it will be priced under Rs. 10,000. Not only that, but the company has also confirmed a few features of the forthcoming smartphone.

As we all know, OPPO’s sub-brand Realme has already made its mark on the smartphone marketplace with its Realme 1. In fact, Realme 1 is by far best smartphone available under Rs. 11,000. The smartphone packs some powerful specification that can equally compete with some mid-end smartphones our there.

So, after the massive success of Realme 1, the company has already shared its plan to launch more phones. In fact, the brand will be launching Realme 2 on August 28. Rumors claim that the upcoming smartphone from Realme will offer some high-end specification at the minimum price.

The price tag has always been on the confusing part with Realme 2. Since Realme 1 is available under Rs. 10,000 and it offers powerful specifications, users are expecting more and more with the newly launched company.

However, the good news is that the company has now confirmed that the upcoming device will be available on Flipkart and it will be priced under Rs. 10,000. Not only that, but the company has also confirmed a few features of the forthcoming smartphone. 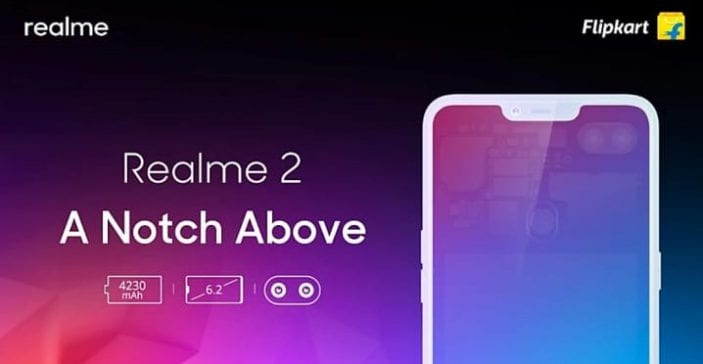 Realme has said that this will be the first smartphone to feature notch display under Rs. 10,000 in the Indian marketplace. At such a price point, the device will also feature a vertically aligned dual camera set up at the back with a rear-mounted fingerprint sensor.

If you are a die-hard fan of Realme, then there’s another good news for you. Qualcomm and Realme have recently confirmed that the upcoming smartphone from Realme will be seen featuring Snapdragon Processor. However, the exact snapdragon processor is yet to be revealed.

Other features of Realme 2 also includes a USB Type C Port which was missing in the Realme 1. Several rumors claim that Realme 2 will use USB Type-C. However, we need to wait for some more time to confirm this particular rumor.

Undoubtedly, Realme 2 is going to be the best smartphone under Rs. 10,000. The smartphone will offer Fingerprint sensor, notch display, USB Type-C Port, Snapdragon Processor, More than 4GB of RAM, dual camera module. What’s else can you expect under Rs. 10,000?

So, what’s your views on the upcoming Realme 2? Share your opinion with us in the comment box below.